Head Coach Bridget (Laszewski) Fitzpatrick was previously one of the varsity boy’s coaches at Thomas Jefferson High School for Science and Technology where she and her athletes captured multiple lower boat Virginia State Championships. She was also the Competitive and Developmental coach for Resilient Rowing Club during the fall and summer seasons. Her rowing experience stems from her Division 1 career at Canisius College in Buffalo, NY where she competed on multiple National stages and was MAAC crew of the year in 2013.  When Coach Bridget is not on the water she is a Physical Education teacher at Southern Middle School. She has been coaching at AJR since the Fall of 2019.

Men’s Head Coach Steve Hall. Coach Hall is the Head Men’s Coach for the Annapolis Junior Rowers.  His rowing and coaching spans more than 50 years, with 28 years of active school and club experience.  Steve learned to row in High School and was Varsity Captain.  He went on to compete four years for Rollins College (Winter Park, FL) that has a long history of rowing (since 1904).  While there, he competed at the Henley Royal Regatta and was varsity captain.  While in graduate school, he coached the first women’s crew at Rollins who won 3rd place at the Dad Vail Regatta in its first year.  After relocating to Annapolis, he joined the Annapolis Rowing Club as a Masters rower and has competed with both ARC and his Rollins Alumni team at the Henley Veteran’s Regatta, twice in the Head of the Charles, two Masters Nationals and a Masters Worlds in Sarasota.  He has coached at ARC with Masters rowers and in Spring 2021 coached the Men’s JV with Phil Lyman at AJR.  Steve is a retired CEO and national sales trainer and thrives in any coaching environment. 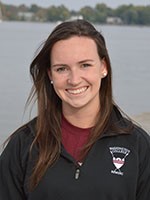 Coach Jaclyn Gibbons, originally from the Boston area, was introduced to rowing in 2009 as a coxswain for the Hingham High School girls’ team. She was recruited by Mike Davenport, head coach of the Women’s Rowing team at Washington College in 2012 to continue as a coxswain with their team. She was named an All-MARC Novice in 2013, a Shorewoman of the Week in 2014, and coxed twice at NCAA Division III championships. In addition to rowing, Jaclyn also served as the Vice President of the Student Government Association at Washington College and on the executive council of her sorority. She currently works at Anne Arundel Community College as a Purchasing Agent.

Coach Kat Krus is relatively new to the Annapolis area and definitely feels like she has found a home here. She was introduced to rowing at Kings Point (USMMA) then transferred to Embry Riddle where she was a charter member of the rowing club.  After college, she was focused on flying and her career. She returned to rowing when she moved to Rockford IL where she joined the Rockford YMCA Rowing Club. She rowed for RYRC for 14 years. She coached Juniors and Masters during her tenure at the club. Some of her notable junior athletes went on to row at Marquette, Michigan, Indiana and Wisconsin.  She has competed at HOCR, Head of the Rock, Des Moines, HOTO, Stonewall, VBC, Cap Sprints and Canadian Henley.  She will be representing ARC MWCR this year at Master’s Nationals and has been accepted into HOCR in her single. Coach Kat has also completed 5 Ironman races and has run many marathons including Boston. She looks forward to working with the amazing team at AJR this year.

Coach Ken Dreyfuss has been active in the sport of rowing for over 50 years, much of that coaching at the highest levels. He began his coaching career at Chestnut Hill Academy in Philadelphia, and went on to successfully coach the U.S. Naval Academy Plebe Heavyweight Crew before taking the helm at Stanford University where he was awarded PAC-10 Coach of the Year in 1986. During his tenure as Head Men’s Coach at Stanford, his crews defeated the University of Washington three times and Cal six times, an unprecedented accomplishment not since repeated. Other career highlights include serving as both team captain and coxswain of the University of Pennsylvania’s Heavyweight Crew that broke Harvard’s six year undefeated streak. Coach Ken represented the U.S.A. at the 1975 Pan American Games, where he earned a gold medal; the 1974 and 1975 World Championships; and the 1976 Montreal Olympics. In 1993, Coach Ken founded Potomac Boat Club’s elite sculling program which, during his tenure, sent more scullers to the World Championships, Pan American Games and Olympics than any other U.S. program. More recently, Ken was the Lightweight Men’s Coach at Georgetown University before returning to coaching juniors so that he could share his wealth of knowledge and experience with the next generation of elite rowers. From 2015 to 2018, Coach Ken helped create Montgomery Boat Club and guide them to multiple successes including three boats reaching the 2018 Mid-Atlantic Championship Grand Finals and one qualifying for U.S. Rowing Youth Nationals.